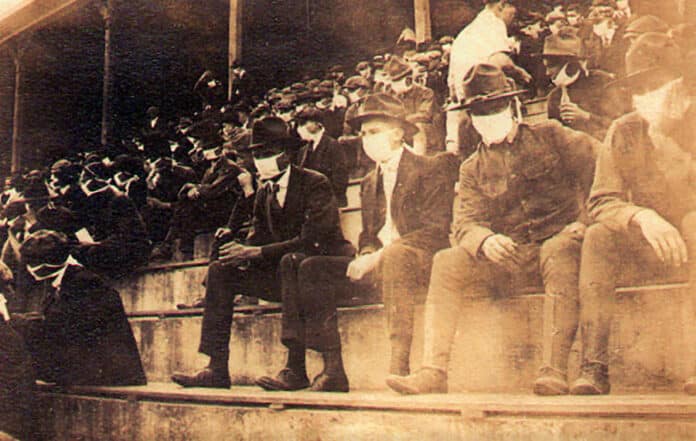 1918 Spanish Flu and World War I at Penn State

A worldwide pandemic threatening not only our health, but our lives; Our Nation at war and going through social upheaval; Wearing protective masks in public; Academic classes delayed or cancelled. Closure of businesses; Quarantines; Major adjustments to the Penn State football schedule.  Sound familiar? Yet the year isn’t 2020 - it's 1918.  That’s right.  A little over a hundred years ago our Nation as well as Penn State experienced some of the same issues that we are going through today.

The 1918 Flu infected nearly half a billion people worldwide, almost a third of the Earth’s population. Like COVID, it was especially deadly to the very young or very old.  However, it also had a significant mortality rate among young adults, who were already being decimated by the devastating losses of World War I.

In 1918 at the start of the Penn State academic year, the United States was planning a major military offensive on the battlefields of Europe for the Spring of 1919. To come up with the manpower, all able-bodied men ages, 18 to 20 were scheduled to be drafted in the Fall of 1918, including undergraduate students at Penn State.

However, the students were offered the option of signing up with the Student Army Training Corps (SATC).  This gave them the option of continuing their education at Penn State while simultaneously completing a basic 12-week boot camp program.  The training included grenade throwing, bayonet practice, and trench construction.

Universities nationwide  were paid a stipend by the U.S. government which allowed the University to keep its financial head above water.  So, at midday on October 1, 1918 nearly 1,600 Penn State undergraduate students assembled at Old Main and were inducted into the SATC. 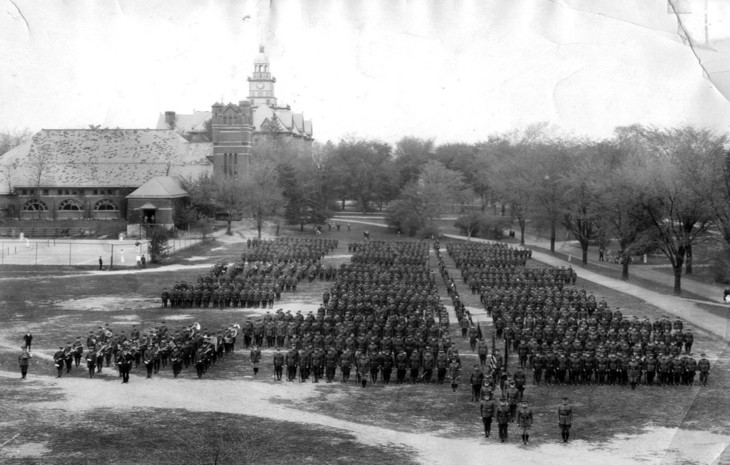 Photo: Student Army Training Cadets (SATC) at Penn State.  On 1 October 1918, 1,650 undergraduate students enlisted in the SATC.  The SATC would later be disbanded when the Armistice ending World War I was signed on 11 November.  Courtesy of Penn State University Archives.

As for the Penn State Campus?  It was basically transferred into a military post.  Fraternity houses were converted to look like barracks.  New barracks were constructed on Old Beaver field.  Students now marched to class.  Major components of the academic curriculum designed to prepare a student for the corporate world shifted to prepare the students for the military world.  The impact floated over into the world of athletics.  The focus shifted from intercollegiate sports to internal intramural sports.  It was felt it would involve more of the student population into becoming fit and prepare them for military life.

Between the 1918 Spanish Flu and World War I, Penn State’s football team had to go through some major adjustments. The team had been scheduled to play nine games.  The formidable gauntlet included such fearsome opponents as Muhlenberg, Gettysburg, Washington and Jefferson, Dartmouth, Lebanon Valley, Cornell, Rutgers, Lehigh, and those frisky folks to our West, the University of Pittsburgh.  However, between the war and the flu, the team had a slight personnel issue to deal with.  The issue was that the entire team,  including its coach, Richard “Dick” Harlow, had enlisted in the Army!  But Penn State is known for its resiliency.  The University decided to field a team anyway, and hired Hugh Bezdek as its coach.

The first two games against Muhlenberg and Gettysburg were cancelled, with “draft laws” being the reason given. Their next opponent was an away game at Washington and Jefferson.  However, due to Spanish Flu concerns, the game was cancelled.  Like today’s COVID, the Pittsburgh area at the time was heavily inundated with the flu.  The next game was away at Dartmouth.  However, travel to New Hampshire exceeded safety distance restrictions due to the Spanish Flu, so that game was cancelled as well.

At this point Penn State as well as other universities were looking for creative ways to play games.  So Bucknell became a substitute opponent and traveled to State College.  However, while both teams were suiting up in the locker room, health officials cancelled the game due to Spanish Flu concerns.   The game against Lebanon Valley was cancelled at the last minute for the same reason.  Cornell would have been next on the schedule, but they had already made the decision to cancel the game due to health concerns.

By November Penn State had not played a single game.  That’s when the Wissahickon Barracks Naval Station located at Cape May, New Jersey came to the rescue.  They traveled to Penn State  and Penn State had its first game of the season. The two teams played to a 6-6 tie.  Now before you think that we couldn’t even beat a team named the Wissahickon Barracks, keep in mind Wissahickon consisted of many collegiate athletes who had enlisted in the Armed Forces.  Penn State was playing its first game with a makeshift team.  So, all in all not a bad performance.  Penn State then lost to powerhouse Rutgers 26-3 but rebounded the next week in a tough win against Lehigh 7-6.  Its last opponent of the season was against Pitt.  Pitt at the time was under legendary Coach Pop Warner.  Pitt, along with another team we are familiar with (Michigan) were declared the 1918 National Co-Champions.  Pitt’s only loss was to another military team, the Cleveland Naval Reserve.  Although Penn State lost the game, it managed to be the only collegiate team to score against Pitt that year.

Despite facing just about every contingency imaginable, the Penn State football team didn’t give up.  Under the circumstances, it was competitive in every game and even today should be recognized for fighting through adversity and bringing credit to us all.

As for the undergraduates who had enlisted with the Student Army Training Corps in October?  In one of life’s many twists, World War I was declared over at 11am on the 11th Day of the 11th Month (November 11, just 41 days after their enlistment.  By the end of the semester the SATC was demobilized.  By 1919 student life was next to normal, at least as normal as college life can be!

Cover Photo: Fans wear protective masks against the Spanish Flu at a Georgia Tech Football game in 1918.  The photo was taken by a student at the game.  Recently posted by Georgia Tech Alumni Twitter Feed and by Dan Gelston of the Associated Press.